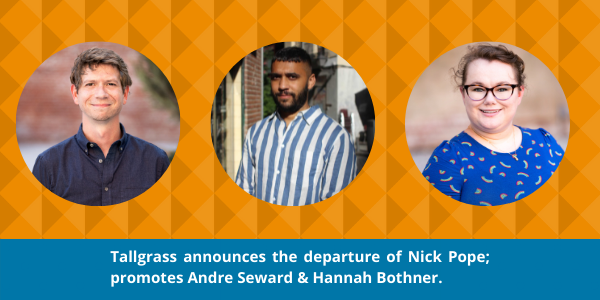 After 19 years of dedication and service, Nick Pope has resigned from Tallgrass Film Association (TFA) as the Director of Programming. His last day with TFA will be Monday, May 10th.

“While Nick Pope may be stepping down, his legacy of service to this organization will not be forgotten. We look forward to seeing what he does next and will be formally thanking him for his many years with Tallgrass at the festival this year,” said executive director Melanie Addington.

In addition to this change, we are delighted to share that two Tallgrass Film Association team members have been promoted. Andre Seward will lead the programming team as the programming director, with Hannah Bothner adding the title of filmmaker relations to her role.

“We hope that the new developments of Andre Seward as our program director and Hannah Bothner, shorts programmer and now filmmaker relations liaison, will help revitalize the great path Nick laid out for us,” Addington stated.

“Ultimately, for everything I’m most proud and for this organization I value more than I ever would know, I’m truly blessed and excited to see it grow and nurture under energized, fresh and spirited new talent,” said Nick Pope. “Not only does our new executive director bring a wealth of film festival knowledge, vision, and passion right out of the gate, but for many years I’ve had the pleasure to be surrounded by people with big ideas and I look forward to seeing those pursued during this next chapter.”

Planning for the 19th Annual Tallgrass Film Festival is in full swing and we are currently accepting submissions here.