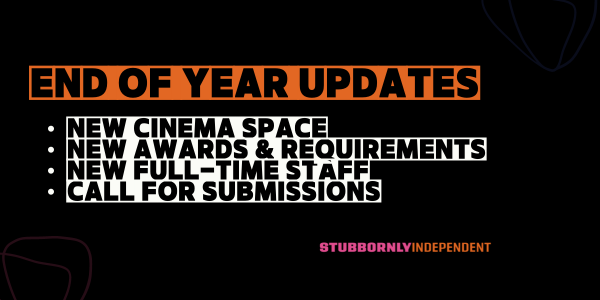 As Tallgrass Film Association enters its 20th year, several positive changes are being made to the organization including a new membership program, new film center, a new fundraiser and new film categories and enhanced accessibility.

Several new categories have been added to the film festival set for September 28-October 2, 2022 with entries opening January 3, 2022. Meanwhile, the organization will also be opening the Tallgrass Film Center in January, a year-round education and film center.

“The addition of the animation, experimental, or virtual reality category (Vortex) and the Spanish cinema (Murmurations) category will broaden the range of our film program and further enrich the festival experience. I’m looking forward to the first edition of these new categories along with the longstanding submission categories. I cannot wait to see the submissions and the final selection this fall,” Andre Seward, Programming Director, said.

The year-round center, set in the Lux at 120 East 1st St North, will open in late January for screenings, film workshops, Filmmaker Alliance meetings, and the Emerging Programmer Apprentice program. The new membership program launched in December will tie into the year-round activities as well as bonus perks for the film festival and provide an affordable student option to attend film events year-round.

Tallgrass is also announcing the promotion of shorts programmer Hannah Bothner to full-time Operations Manager while long-time Marketing Director Gray Rodriguez is exiting the organization at the end of December.

“I am so excited to be continuing my journey with Tallgrass and to join the organization full time! I love Tallgrass so much and I am really looking forward to helping Tallgrass grow. And I’m even more thrilled that I’ll be able to continue to program my favorite part of the festival: the short films!” Hannah Bothner, Operations Director, said.

The new categories for the festival are:
VORTEX – Get swept away with these imaginative short films… you’re not in Kansas anymore. A short-film category for animation, experimental, hybrid, or virtual reality projects. Films submitted to this category should be under 40 minutes in length.

“The films in this category are always some of the most creative and moving films in our program. We’re thrilled to be able to give these films their own category and can’t wait to see what filmmakers submit!” Hannah Bothner said.

Murmurations – Spanish cinema in Kansas: Gracing the façade of the Ulrich Museum of Art at Wichita State University since 1978, Spanish artist Joan Miró’s monumental mosaic mural Personnages Oiseaux (Bird People) is a welcoming icon to visitors from Kansas and around the world. With its brilliance of color, dazzling play of light, and playful imagery, it is arguably the most significant piece of public art in the State of Kansas and a testament to Miró’s belief in the transformative power of public art.

In collaboration with the Ulrich Museum of Art, Tallgrass Film Festival is pleased to announce the creation of a new film category for Spanish contemporary cinema, Murmurations—a celebration of the enduring connection between Spain and Kansas exemplified by Miró’s Personnages Oiseaux. We hope Murmurations will be an opportunity for cultural exchange for our community and for the US and Spanish filmmakers during the 2022 festival and for years to come.

“Our partnership with Tallgrass Film Festival is a great source of pride for the Ulrich, giving us the opportunity, this year, to honor a truly remarkable artist and his marvelous mural.”said Leslie A Brothers, Director of the Ulrich Museum of Art.

The Murmurations category is open to short and feature films that meet the following requirements: fifty percent of production is based in Spain OR writer, director, or producer is based in Spain; the original voice is in Spanish or one of the co-official languages of Spain (Basque, Catalan, Aranese, and Valencian); and subtitled in English language.

In our efforts to reach a wider audience and ensure that people of all abilities can enjoy independent cinema, Tallgrass is introducing a new requirement for all exhibited films. All selected films for the festival must have captions in English available. Filmmakers have the option to provide for virtual or in-person or both. These will be closed captioning on virtual and open captioning when available in person.

“All of these additions are a wonderful way to kick off our 20th year as we move from our teenage years to being a grown up organization. In particular, Hannah is such an excellent person committed to the mission of Tallgrass,” Melanie Addington, Executive Director said. “Her promotion to this role is only natural as she is such a self-starter and fantastic co-worker. We are happy to see what she does with the future of the organization while still flourishing within her role as shorts programmer. But losing Gray is a heartbreak although we are happy to continue to partner with her in the industry through her work with Film Festival Alliance.”