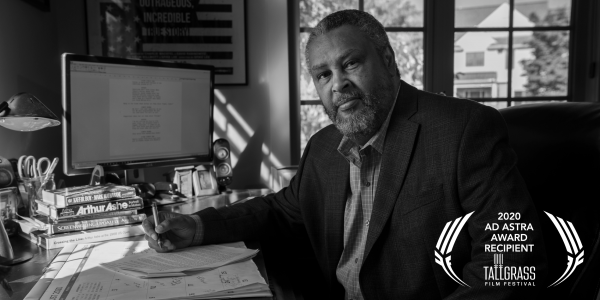 The 18th Annual Tallgrass International Film Festival presented by Consolidated Equities Trust (October 16-25) is honored to announce that this year’s Ad Astra Recipient is Academy Award winner Kevin Willmott. Willmott won an Academy Award and the BAFTA the British Academy award in 2018 for co-writing with Spike Lee the feature film BlacKkKlansman. The film also won the Grand Prix at the Cannes film Festival. The 2020 Ad Astra Award is sponsored by Evergy.

On this year’s award, Director of Programming Nick Pope shared:
“Tallgrass has been fortunate to have Professor Willmott as a friend of our festival for many years. Whether as an alum and visiting filmmaker for such films as The Only Good Indian, The Battle for Bunker Hill and Fast Break: The Legendary Coach John McLendon or moderating a discussion with legendary actress, Ms. Pam Grier, Willmott’s views on history and the art of filmmaking are always illuminating and timely. His lectures at the University of Kansas and rich filmography – from Ninth Street and Chi-Raq to Da 5 Bloods, and of course, BlacKkKlansman – continually challenge notions of race and perceptions of popular culture. We’re thrilled to bring a selection of Mr. Willmott’s work to this year’s festival including his latest, The 24th. An Academy Award, a Bafta and number of other well-deserved awards and accolades from around the world notwithstanding, Tallgrass is honored to give Professor Willmott the home state celebration he so richly deserves.”

Willmott also co-wrote and is the Executive Producer of the critically acclaimed film, Chi-Raq also directed by Spike Lee. The film is on numerous best of 2015 lists including best film and best screenplay by The New Yorker Magazine.
Award winning films written and directed by Willmott include Ninth Street, CSA -Confederate States of America, the Battle for Bunker Hill, Jayhawkers and Destination Planet Negro.

Willmott grew up in Junction City, Kansas and attended Marymount College receiving his BA in Drama. After graduation, he returned home, working as a peace and civil rights activist, fighting for the rights of the poor, creating two Catholic Worker shelters for the homeless and forcing the integration of several long-standing segregated institutions. He attended graduate studies at New York University, Tisch School of the Arts, receiving several writing awards and his M.F.A. in Dramatic Writing.

Willmott is a Professor in the Media and Film Studies Department of Kansas University.

Tallgrass will be presenting a collection of Kevin Willmott’s work during the 18th Annual Tallgrass Film Festival, including The 24th, Destination Planet Negro, and the Confederate States of America.

The Ad Astra Award presentation will be available for live streaming on Saturday, October 24th at 8 PM CST and will include a conversation on Willmott’s extensive career hosted by Wichita State University professor Dr. Robert E. Weems, Jr.