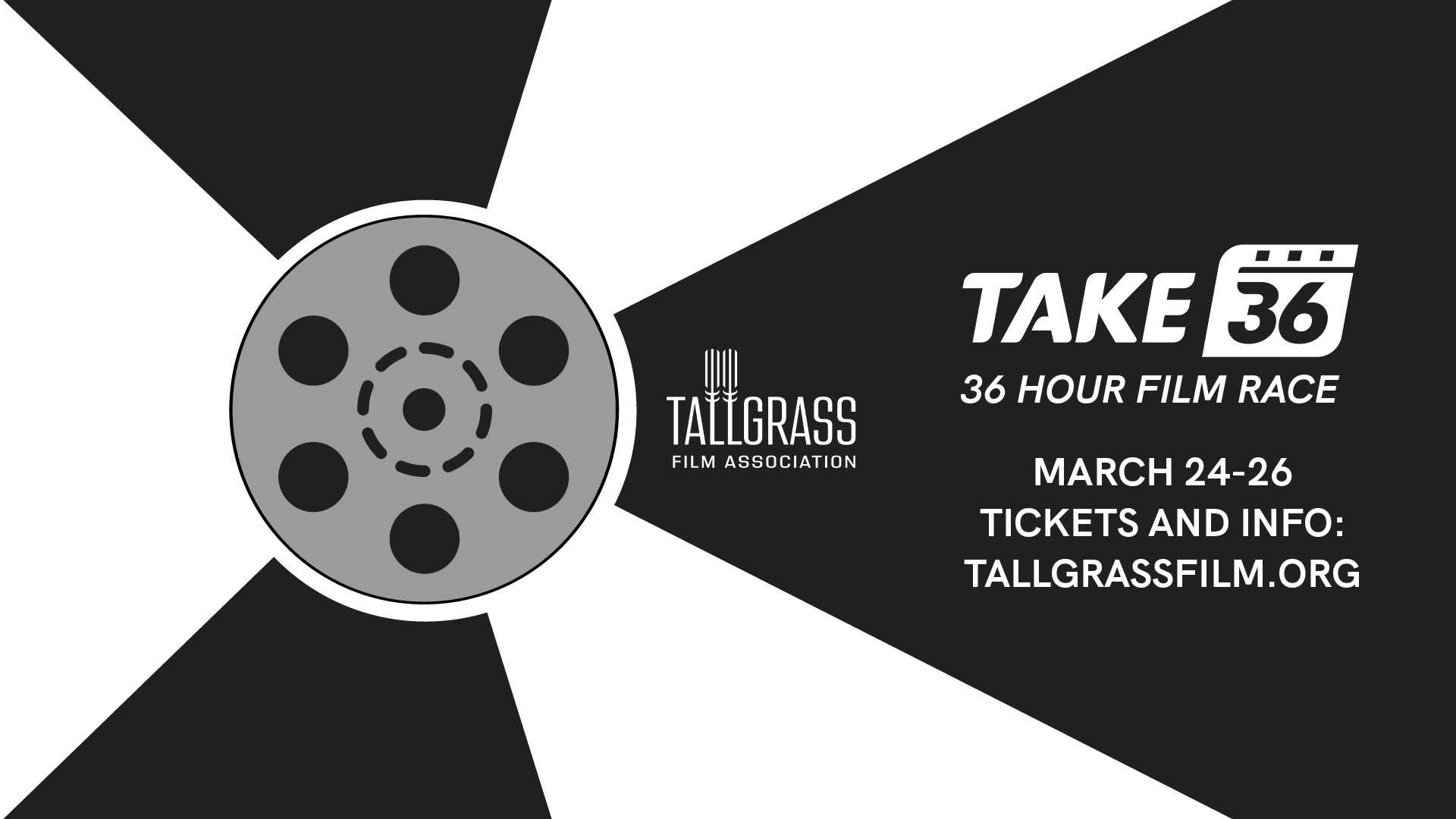 In TAKE 36 we task creatives to conceive, develop, write, shoot, edit, and submit a short film, made in just 36 hours! And just to keep things interesting, we will have some required criteria that must be present in all submitted films! Anyone is welcome to participate! We have had filmmakers from local middle schools and high schools compete as well as seasoned professionals. We will just ask that you be safe and have fun and abide by the rules set forth by Tallgrass Film Association so that everyone stays safe and healthy.

Films will be judged and critiqued LIVE at the Top 10 Showcase by a panel of esteemed guest judges. Tickets for the showcase, hosted by The Orpheum will be on sale in February 2023.

1. ALL content MUST be original and created within the 36 Hour Time Period

2. ALL films must be six minutes (06:00) or under from the start of the film to the end of the credits. (Excludes Title Card)

3.  ALL finished films must be submitted by the 36-hour deadline – with all signed talent/actor, music, & location releases.

4. ALL teams must agree to follow CDC health and safety guidelines, in regards to Covid-19, and best practices for productions.

5. Films must not contain anything pornographic, excessively vulgar, or are violent for the sake of violence.

6. ONE person from your team MUST be available Friday night for the TAKE 36 kickoff meeting.

*If you or someone from your team breaks one or more rules mentioned above, your team is subject to disqualification.

ANYONE! Young, old, amateur, professional, literally anyone! We want to hear stories from all different walks of life. Start building your team now!

How many people can be on my team?

As many as you like, as long as you are able to social distance when possible and follow other necessary CDC health and safety guidelines in regards to covid-19. (Team prizes, such as festival movie passes, may be limited.)

How long do we have to make our film?

36 hours. Your film MUST be submitted to our dropoff point by the 36-hour cutoff (not a second later) or you will be disqualified.

What kind of film should we make?

You can make any kind of film you want! Comedy, drama, horror, musical, animation, stop motion, thriller,  love story, sci-fi space epic. Whatever speaks to you! Whatever story you want to tell!

Use whatever you have at your disposal! Get creative and have fun. Always wanted to shoot a short on an iPhone? Do it! Want to test out that new camera? This is a great opportunity for that!

How long can our film be?

6 minutes max. Not including any title cards necessary. It can be shorter if you like, as long as you can tell a great story!

What can we create ahead of time?

Nothing. Don’t do that. The whole point of the competition is to create your entire film in 36 hours. That means you have to conceive, write, cast, film, edit, score, and complete your film in the 36-hour time limit. There will be forms and instructions for music releases, location releases and talent releases so it is all legit. You CAN, however, put your team together, scout possible locations you have access to, and test equipment and cameras, just don’t try to write or work on your final film.

What is the deal with the elements?

We will provide every team with some criteria/ elements that must be featured in order to succeed. These elements will be very clearly stated and understood on Friday night to avoid any confusion. Beyond that, it is recommended to be as creative as possible when incorporating your elements. These elements are provided, not only for fun but also to ensure you play by the rules and compete honestly by creating everything in the 36 hour period. If you fail to include any of your elements, you will be less likely to win top prizes.

What CAN’T be in the film?

Anything pornographic, excessively vulgar, or overly violent for the sake of violence (Gratuitous violence). We understand you are artists, and we don’t want to squash that! However, we have all ages competing in this competition and attending the showcase, so be aware of what you are shooting and who you would feel comfortable showing it to!

Who decides if we make the “best of” showcase?

Starting at 7 am on Sunday, we task our team of programmers to watch all of the entries. They will rigorously judge and critique the films and whittle them down to the best ones. They will also be viewed by our special guest filmmaker judges and scored and critiqued accordingly, in preparation for the film screening showcase. This kind of festival programming feedback is an excellent way to gain honest knowledge of what worked and what didn’t.

Where will the film be seen?

If your film is picked as one of the best, it will screen in a live event at The Orpheum in Downtown Wichita, KS! A panel of filmmakers will give a short live critique after the films have screened. Awards will be given out at the end of the evening honoring the BEST OF THE BEST!

What is the showcase?

The showcase is our chance to show off your hard work and talents to our super supportive community! If your film is picked, it will screen LIVE in front of real live people, like your friends and family and community! Prizes and awards will follow the screenings!

How do I know if our film got picked?

Watch the showcase and find out! I know it will be super nerve-racking waiting to see if you screen but that’s the fun of it! Plus you get a chance to see what your peers came up with and support everyone else’s artistic endeavors and hard work!

Who do I contact if I have any more questions?

Sign up to receive the latest announcements, tips, networking invitations and more.